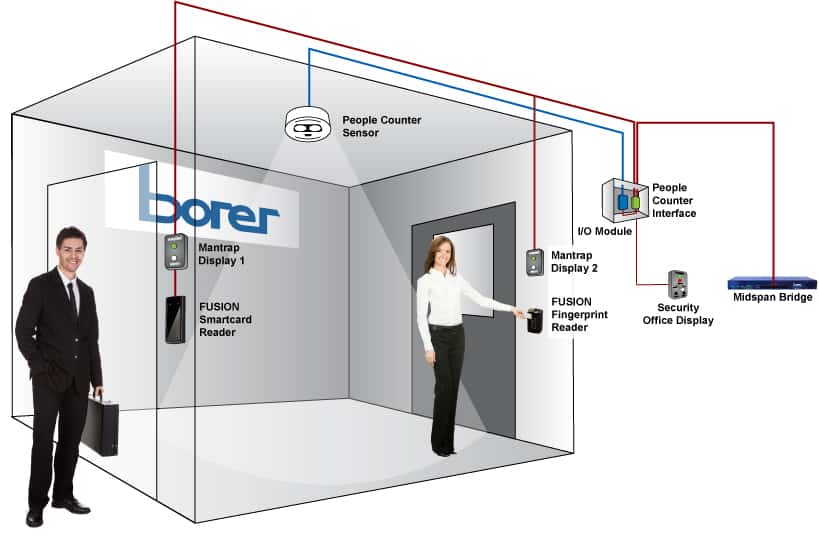 In its simplest form, a door interlock is made up of two electronically connected doors configured so that when one door is open or unlocked the associated door remains closed and locked down.  A person passing through an interlock enters the first door which must then be closed and locked before the second door is unlocked and the person permitted to complete their passage.

Door Interlocks take many forms and are used in many different applications, including:

There is often a need for a multi-door interlock especially when a clean room or area has more than one entrance.  This requires locking down selected combinations of entrances while other entrances are in use. This is done at the hardware level with each entrance equipped with a door controller which is connected via a network cable to a Midspan Bridge. The Midspan Bridge provides a global interlock function for up to 16 doors or eight entrances with a pair of interlocking doors. A set of user generated rules running as a script in the Midspan Bridge monitors activity at each entrance, locking down selected entrances while people access other associated entrances. Users setup and modify their own interlock rules.

A mantrap or a security booth is a security device that monitors and controls two interlocking doors so that they can’t be opened simultaneously. One door can be unlocked and opened, as long as the other door is locked and closed. Between these interlocking doors is a small, secure space, which only permits one or a small number of people to be in there at any one time.

Mantraps can be used to limit the number of people permitted to enter or to be inside a specified secure zone at any one time. In high-security applications, this ensures that at any time the secure zone is either empty or has two or more people inside, and never one person on their own.

The addition of a 3D imaging camera to count the number of people inside the mantrap, and biometric readers to verify people’s identities, will ensure that everybody attempting to pass through the mantrap will have their access credentials and identity fully validated before access is granted.

Biometric verification entails writing a template representation of the cardholder’s fingerprint to their ID card. Once a match between a cardholder and their biometric fingerprint is made by the fingerprint reader, the cardholder is fully authenticated and can safely pass through checkpoints without having to undertake any further checks.

Access control booths configured as mantraps effectively separate an unsecured area from a secured area, which makes them ideal for the protection of high-value items or in security-critical applications, such as: